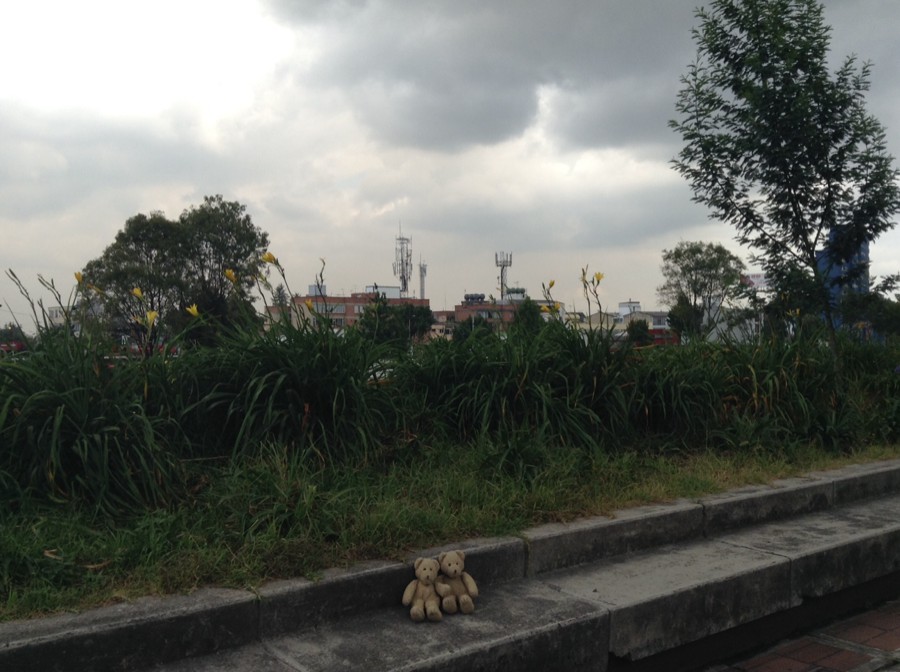 Just me and a Fooh in Bogota, taking a rest while G-bear explores the city by foot. 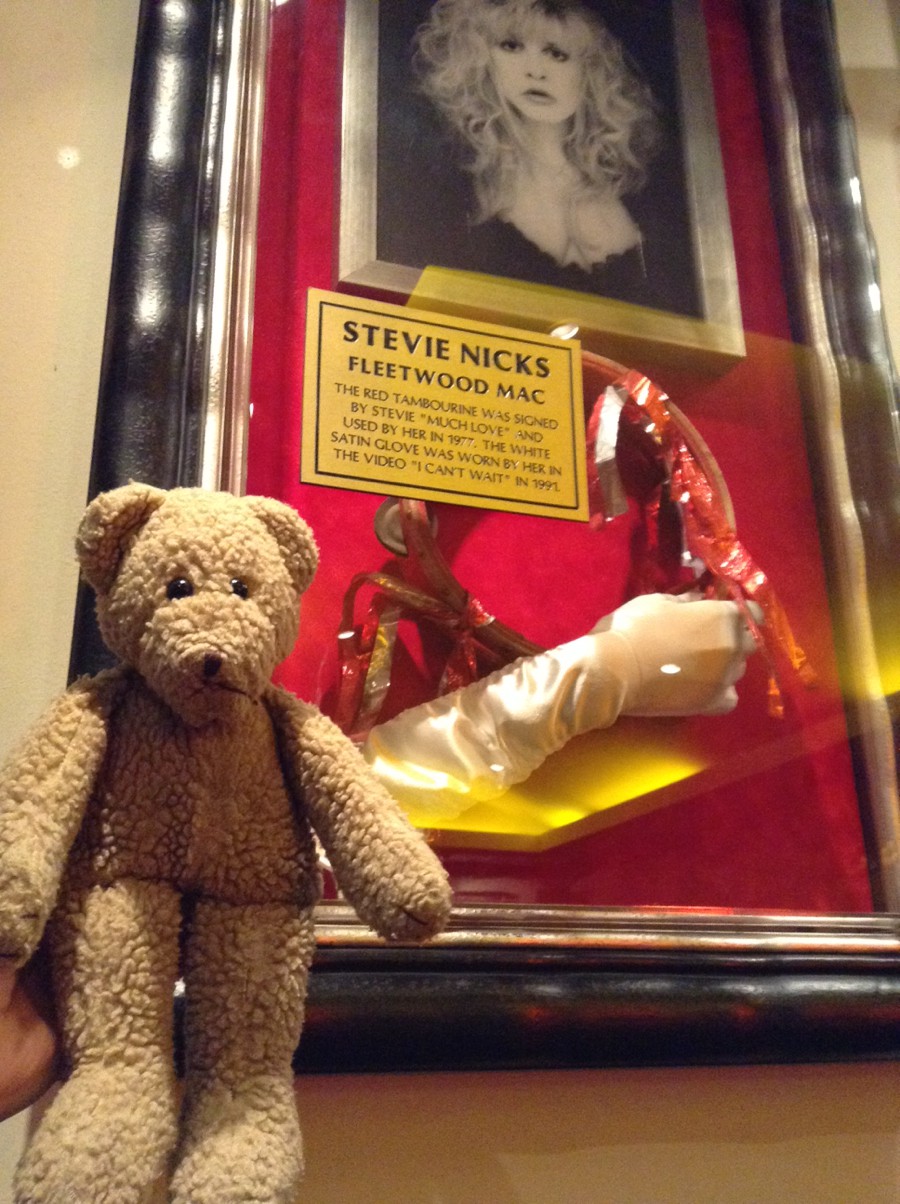 Fooh and I met Stevie Nicks last April. Here is a tambourine and a glove she used to own. Spotted at the Hard Rock Cafe in Bogota, Colombia 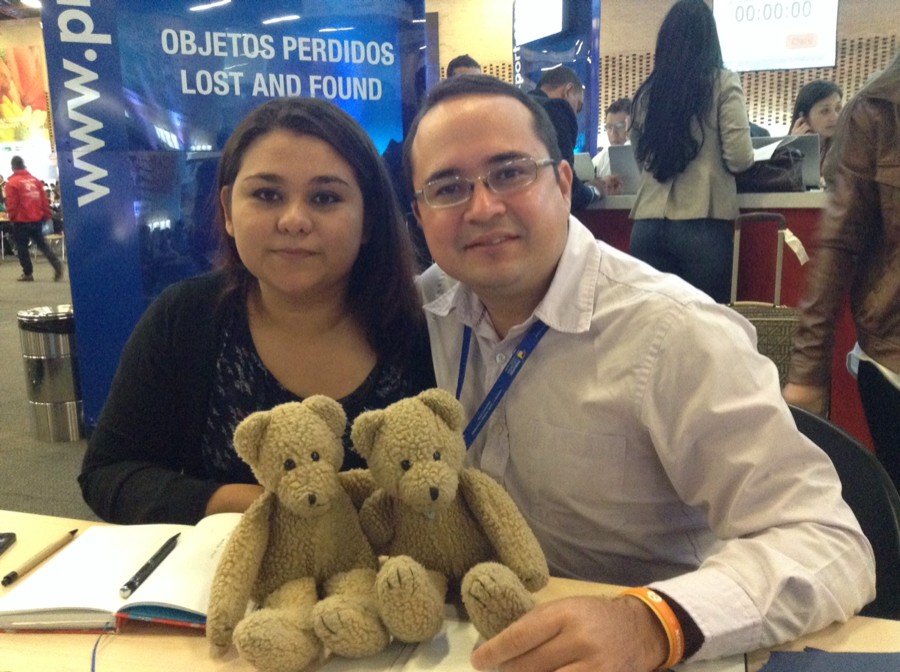 We found these nice people who will try to make friends for us! We went through a full examination... X rays, measurements, and a complete physical. Hopefully we will have hundreds or more Rooh's and Fooh's in the world! We look a little tired from all the poking!

We turn 20 years old in May 2014 so it would be very fitting if there were 1000 of us to continue our legacy in case something happens to us or g-bear.. I envision a web site where people can adopt one of our descendants and upload photos of them around the world or with the people they live with. Their names have to end in "ooh", though, such as Booh, Hooh, Mooh, Tooh, Zooh, Xooh, Vooh, Nooh or Mooh. 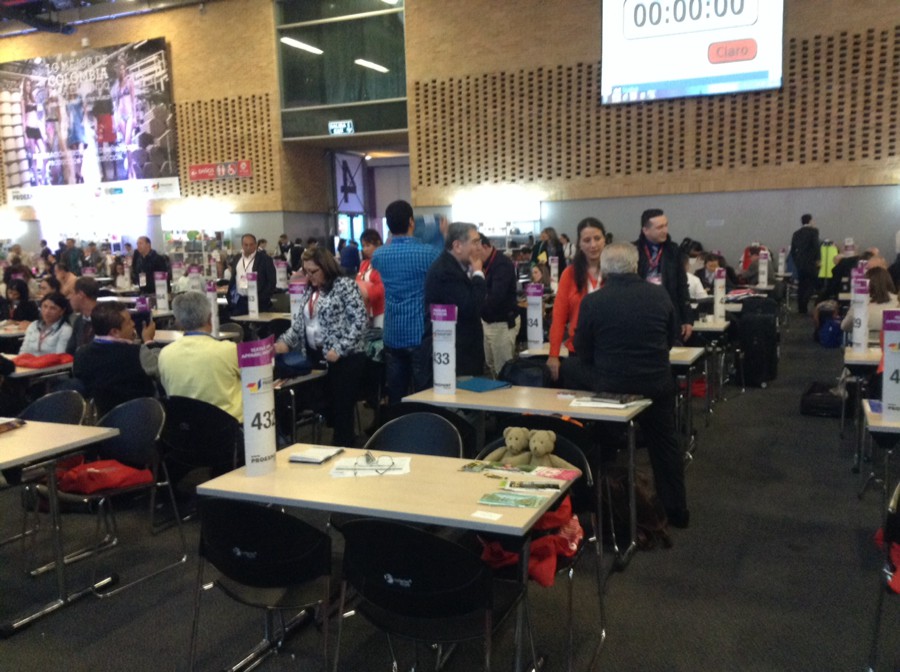 Me and Fooh sitting at our table at Macrorreuda 50 in Bogota Colombia. We're waiting for the next meeting between G-bear and local lingerie companies. G-Bear is also looking for companies to help make friends for us, as we have determined that we are so rare, there is little chance of finding anyone like us... We need to submit some best DNA and try to create clones. 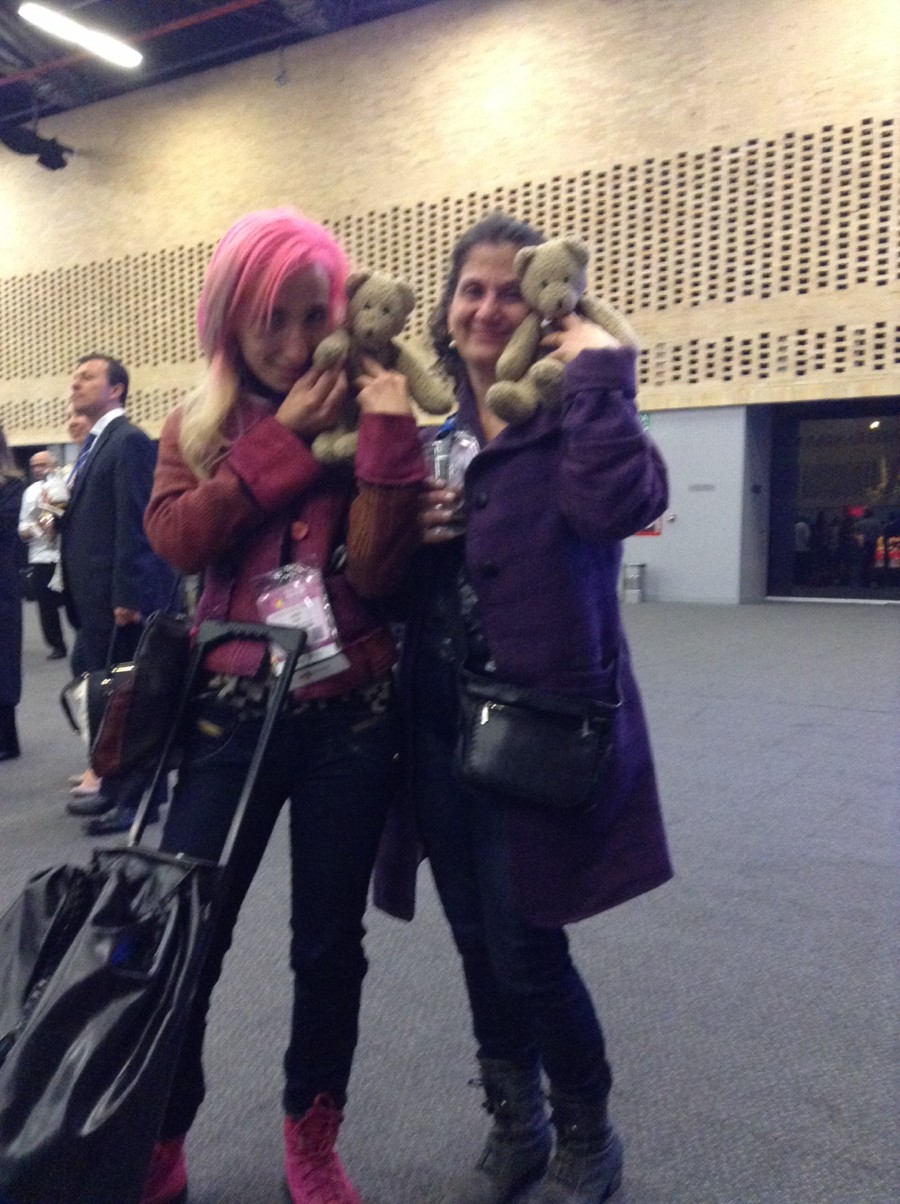 A couple of girls we met in Bogota Colombia. I think they like us!

G-bear took us to see the movie Her tonight! It was good! We saw it purely on the reputation of Spike Jonze after falling in love with his short film I'm Here and even buying a copy of the song featured in the movie. For a while, we had our own seat and the seat next to us was empty too but the theatre ended up being packed full. Fooh sat with a nice girl next to us, and I sat on G-bear's lap the whole time.

It takes place in future Los Angeles (year unknown but looks to be about 50 years) where a computer company develops something like Siri, but way more advanced. The user is able to talk to the computer and ask it to do things just like Siri, but in the movie, the version of Siri is way more advanced and has a personality and even takes on real human for a while by finding a girl to play the physical part of "her". It's all fun and games for a while until the user actually falls in love with "her" (meaning the advanced version of Siri) and they even have arguments, jealousy, deep psychological conversations, and "she" meaning "her" can even go through the users emails and apply for jobs for him.

It reminds me slightly of the movie A.I but is more like I'm Here, I think. The user goes through some tough times dealing with "her" and (spoiler alert) she actually leaves him at the end of the movie. G-Bear and I think that she left him because the developers found a flaw in the system and had to uninstall it. Either that, or there was a patent dispute or maybe even there were too many people falling in love with their version of "her" that society was crumbling, and a bunch of politicians ordered it shut down.

A few things we noticed about the future Los Angeles:
it's still smoggy
everyone wears their pants up very high
everyone wears solid colours (hardly any printed fabrics)
no graffiti anywhere to be seen
if an elevator doesn't have a glass window to see outside, I love the illusion of climbing a tree when going up or down an elevator
it reminds me of Star Trek but still no flying cars!

If I may strain my bear brain for a moment, I think the movie is a fore-shadowing of what may happen to society and it's not the director's fault for seeing that. Oliver Stone once said he should not be blamed for making a violent movie like Natural Born Killers, because that's what he saw in society at the time, and I think Spike Jonze sees the same future with all the texting going on, the anti-social behaviour, the paparazzi, the Facebook and Twitter universes, etc. I think it's a message to us that we had better remember how to make social connections instead of relying on text messages to our aging parents, and we should be calling them instead of emailing them. To be fair, the user in the movie was going through a tough time with a divorce and she (meaning "her") showed up at a time when he was vulnerable. I hope G-bear doesn't become like the user in this movie. He does computer stuff all day and is known to send text messages to someone in the next room. Also, he doesn't have a human girlfriend. He has plenty of things including both parents and a bother, but no human girlfriend. Me and Fooh (and RareBear and FairBear) help a lot but I don't think I can compete with "her".

We like how the movie ends with "her" going away, the user feeling sad and lonely for a while, then he meets up with his neighbour in his condo who is also going through a divorce. Also, the little video game character that looks like a ghost was hilarious :-)

In other news, Christmas is gone for another year. It was smaller than last year. G-Bear got a duvet, some pillow cases, a carrying case for his iPad mini, some wine, chocolates, a nice black shirt, a leather case for his laptop, and some other things I don't remember (like gift certificates for Harveys, Subway, etc).

G-Bear is still at the same company since July and doing good though not changing the world as much as he would like. The pay is great, but he's been interviewing with other companies in secret just incase he gets laid off. He doesn't have much savings right now. I keep telling him to have 3-months of mortgage payments in the bank at all times, but he only has enough for 2 weeks right now.

There's a good chance we will go to Colombia for a few days in February. A bunch of lingerie companies want to meet G-Bear to try and sell him their services and their products, and the country of Colombia will pay for it if we pay our hotel. We'll try to stay a week or two extra.

2013 has been pretty good despite going a few weeks without a job in January and again in April. The highlight was meeting Stevie Nicks at TIFF in April then G-bear took us to see her in Colombus, OH front row a couple weeks later! We danced on the stage and clapped along with Stevie Nicks less than 5 feet away from us for over 2 hours! Sales on the web site have been good (selling $15,000 this year though we sold $18,000 last year). G-Bear has his birthday on Tuesday. We might celebrate with the big crowd at City Hall downtown.

Me and Fooh basking in the attention we got today from a flight attendant named Madeline on the way to Chicago :-) 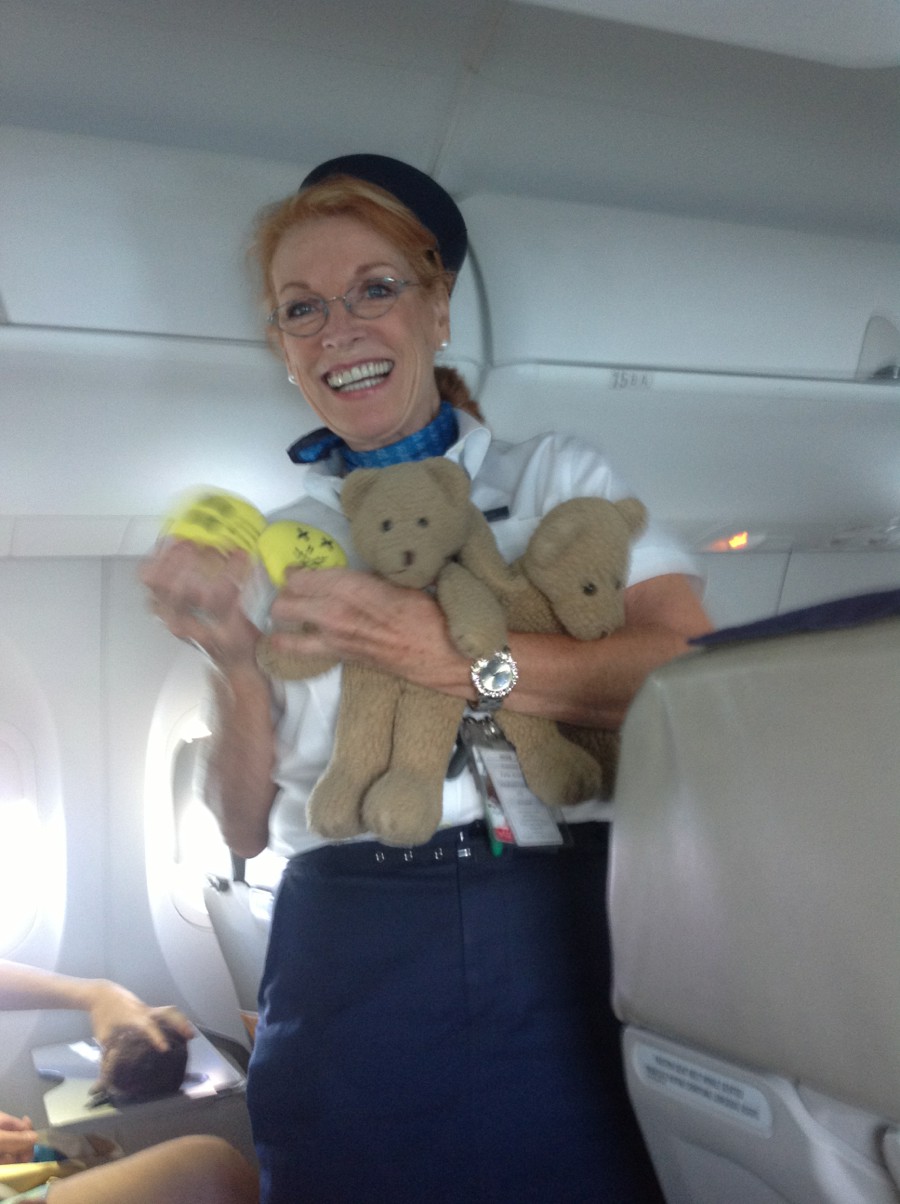 Me and Fooh at the Eiffel Tower 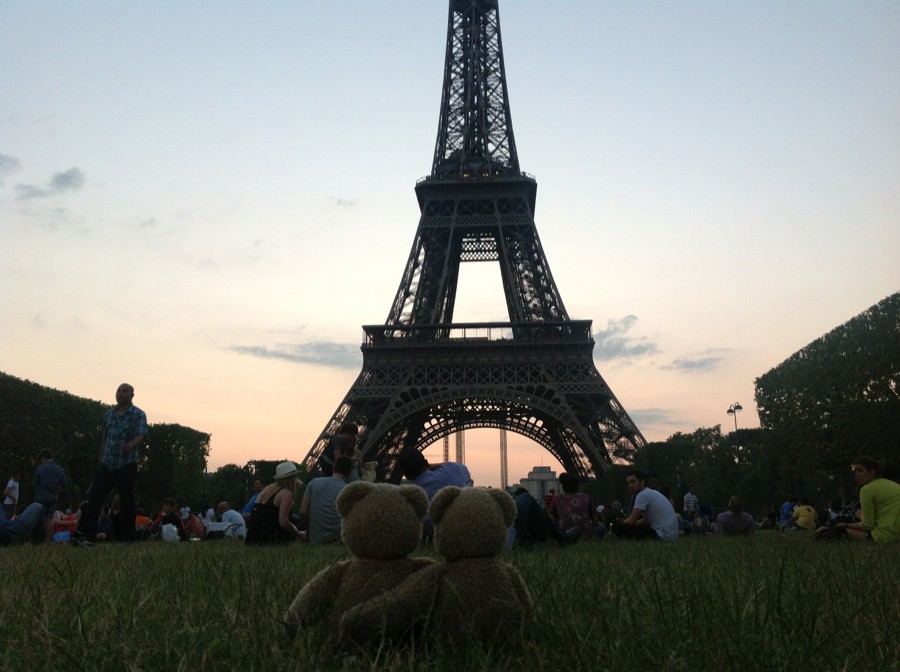 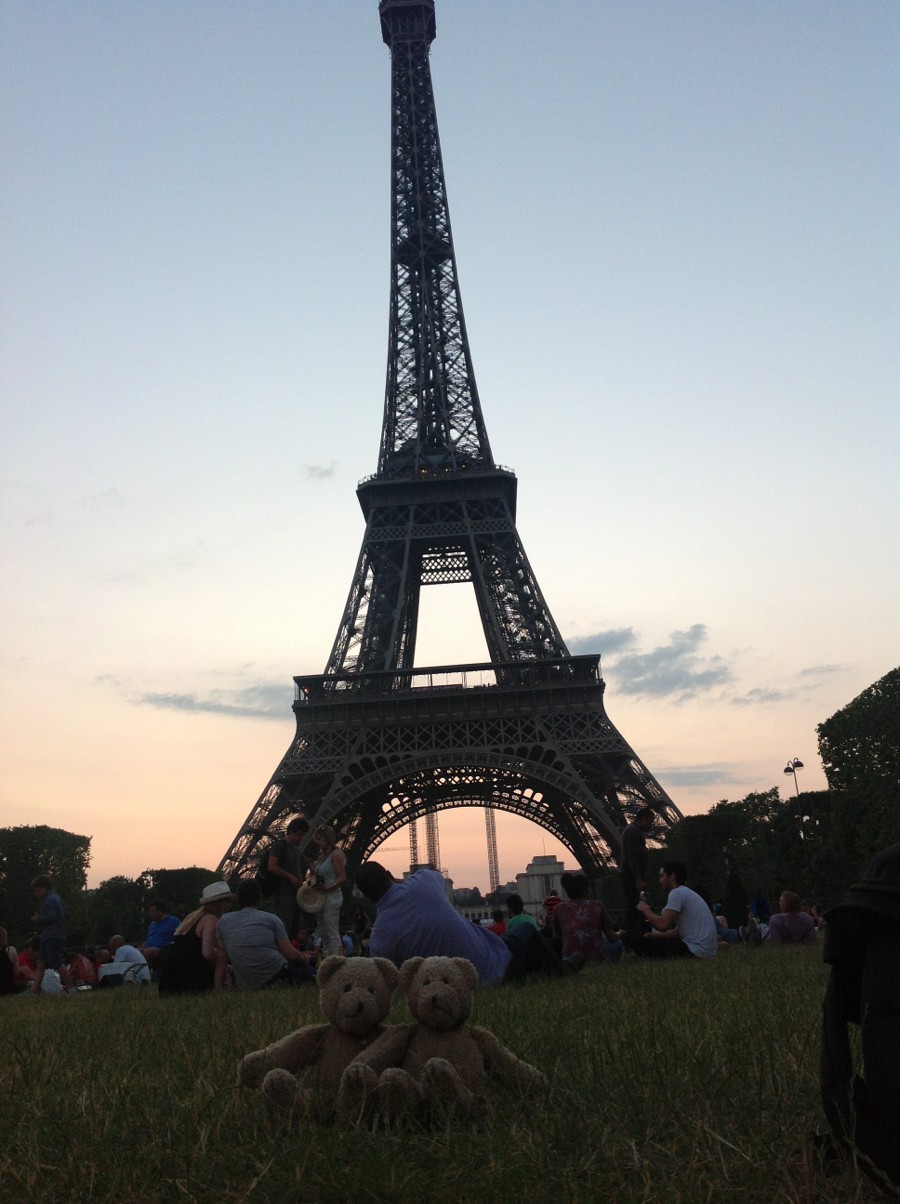 Me at the "Statuette of Liberty" in Paris. 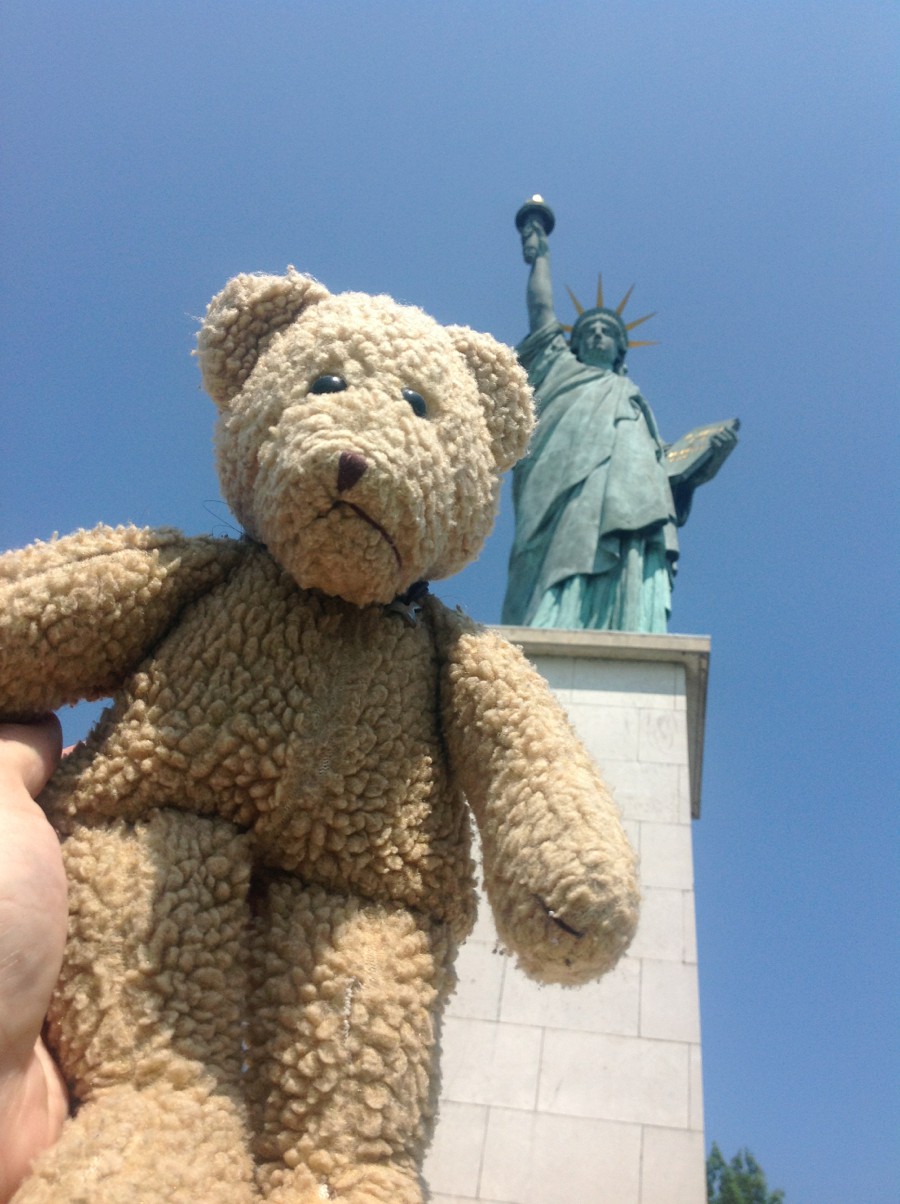 Look! A store called "Pull and Bear" with me and Fooh sitting on a bench in front 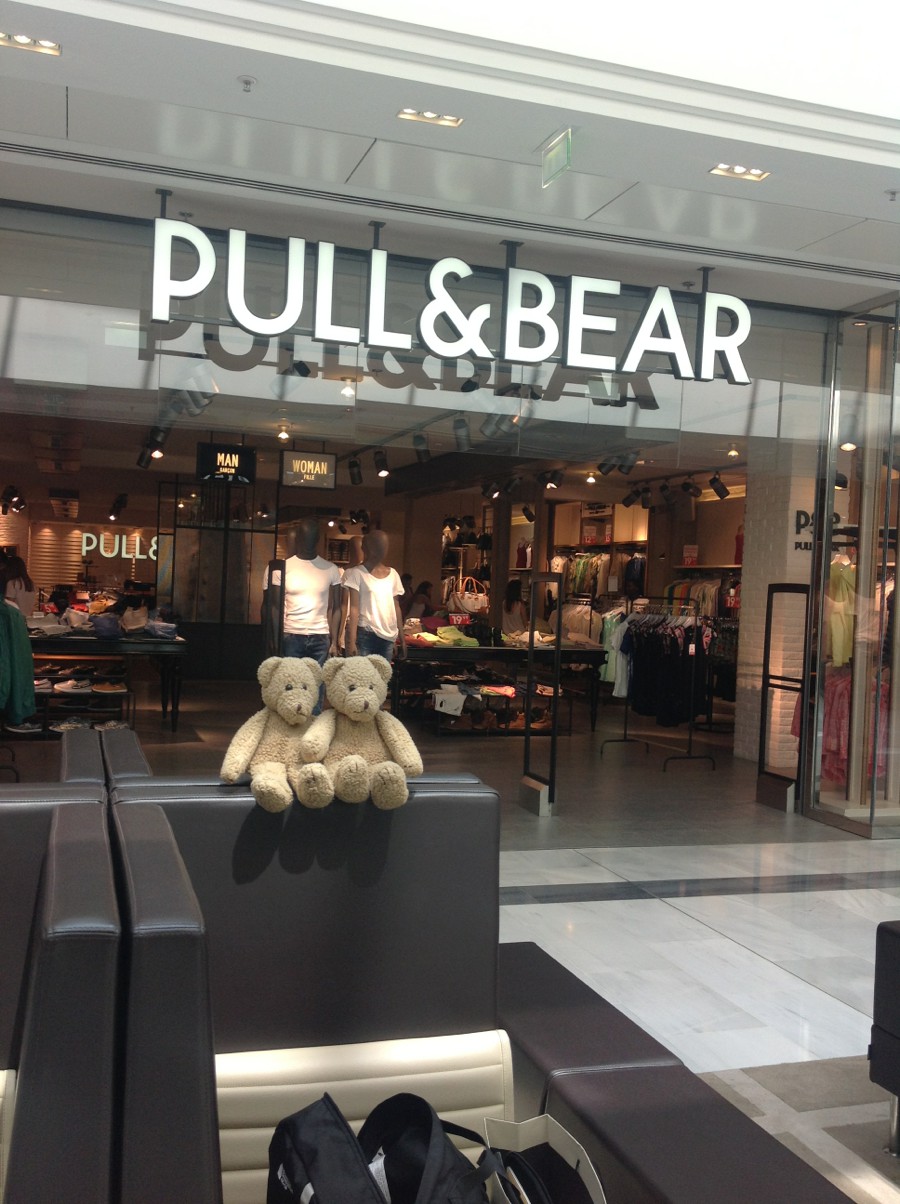